I hit 3 miles today!!!  Finally.  Three miles is my milestone where I feel like I am well on my way back on the road of running.  I was beginning to worry about hitting it because my Get in Gear 5K is in less than two weeks and I had been struggling to get up to 2 miles.
I set out both Saturday and Sunday to do my usual neighborhood loop and about 1.5 miles into my run, I had to walk.  My feet felt like they were blocks of concrete and my calves tightened up so bad.  I had to keep stopping to stretch and eventually just gave up and walked home.  Of course I had to blame the shoes I was wearing and it became my mission to get new running sneaks today.
I have a theory about my current running shoes, I think they are TOO SUPPORTIVE.  I have been fitted with a stability shoe for both my weight (I was told they were better for heavier runners...GAH!) and because of my over-pronation.  As I was looking at my collection of running shoes, I realized that the 3 pairs of stability shoes I own were worn during some of my worst injuries (knee, PF, and IT band issues).  My idea was get a shoe that was not as built up in the arch because I feel that the extra support causes more stress on my feet and legs.  My theory might be complete bull shit but I wanted to try something new this time around.
I paid a visit to my regular running shoe store in Minneapolis, Marathon Sports (awesome, awesome place).  I explained my idea to the guy helping me and since he didn't look at me like I had completely lost my mind, I decided on this shoe: 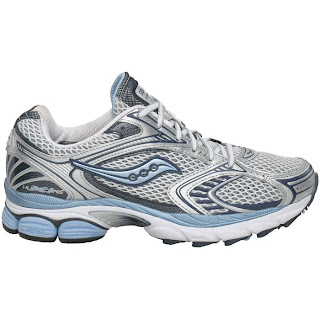 It is only slightly less supportive than the Saucony Stabil that I normally wear, but I think it will give let my foot do a bit more natural movement. It looks almost excactly the same however, the soles and the arches are not as "blocky".   I gave the shoes a test run tonight and I was able to run my 3 miles (albeit at a snail's pace) with no problems. Maybe I was right....we will see.  Wish me luck!
Posted by Unknown at 9:35 PM

wishing you luck!!! Great job getting to 3! Have a great week! do you like my exclamations!

I love new shoes, except I have been wearing the same make and model for years.

Congrats on 3.. I'm supposedly running a 5K in 2 weeks. Bwahhh! I have not worked out due to illess in 2 weeks.

When the feet feel good, the run feels good!
Congrats on the 3 miler!

Congrats on 3 miles...can't wait till I am there!

Running for Me said...

Good Luck! I like your new digs. Have a great week!

Good job on the 3 miler. I can related to the excitement of getting back to where you were. I hope the shoes work out well for you.

Ms. Carly, I think you have it right. I was in stability shoes and was injured all the time. A running coach friend suggested that I dump the stability shoes because they are so overbuilt. I dumped them 2 years ago and the only injury I have had was blisters I got doing a half marathon yesterday.

Great job on your run!!! I hope those shoes are what you need :) I hope you have a wonderful week!

These are the same shoes I've been wearing for the last year or so. I love them! Hope you do too!

You will surely be ready for your 5K. I have expectations of you now!

Shoes are such a nebulous thing! I thought my early foot injuries were from over-pronating so I got stability shoes. Then I was told I had high arches and needed less support. I'm a fore/midfoot striker so do I even use all that neutral/stability/motion control "technology" if I don't land on my heels? I'll second your "gah!!!"

I think my mizunos are a bit too supportive too. I don't like to walk around in them. They're ok for running but I'm nt in love.

congrats on pushing up your mileage :) and hooray for new shoes! hopefully you will notice a difference soon. i am usually torn on shoes and if it's mental or really the shoes.

I too cannot stand when little Miss Suzie Sunshine says "well these shoes are made for larger runners". Makes me feel like I'm Hilda Hippo (no offense to anyone named Hilda). Really now how are we supposed to lose weight without a good pair of running shoes?! The times I've said I'm training for a marathon, they look at me like I'm crazy. If I tell them I did 3 last year, their eyes roll back into their pretty little heads. I may be slow, but my finisher's medal looks the same as those who finish up front. BACK OF THE PACK WADDLERS UNITE!

viagra online without prescription can purchase viagra - viagra dosage half