Happy Thanksgiving!  I wanted to take some time to reflect on all the things I am thankful for in life.  As I was thinking about how blessed I am, I started laughing because I reminded myself of Chubby Hubby's big brother.  When he would throw back a few cocktails, he would get all sappy and hug everyone while telling them how much he loved them.  My Thanksgiving list sounds a lot like him except I am sobe (for now).  Here is just a few things I am thankful for in no particular order:

These are just a few of the many many things in my live that make me so blessed.

What are you thankful for this year?

What a crazy couple of weeks and I am just in awe that we are already going to be celebrating Thanksgiving tomorrow!  I wanted to swing by and announce the winner of the copy of the book Hot (Sweaty) Mamas. 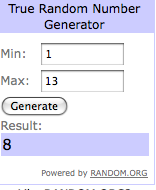 Abby!
Please email me at fatrunnergirl@yahoo.com with your shipping address.  I hope you enjoy this book as much as I am enjoying it. (I am a slow reader)

Happy Thanksgiving!!!!
Posted by Unknown at 2:48 PM No comments:

Hot (Sweaty) Mamas are Here on a Book Tour

I am very excited because I have special guests visiting today, Kara Douglass Thom and Laurie Kocanda, co-authors of Hot (Sweaty) Mamas: Five Secrets to Life as a Fit Mom. They are stopping by on a virtual book tour and will be sharing some insight.  Not only are they the author's of the fabulous book, but they are practically my neighbors!   Both women currently live in the great state of Minnesota.

I am currently reading this book and I am loving it!  It is  not the same old tips and tricks repackaged for busy moms.  This is a practical guide full of tell it like it is advice (without being condescending).  I am only about a third of the way through this book and I have already learned a thing or two.  What I find so refreshing about this read (or what I have read so far) is that it is not a postpartum weight loss book that helps you get back into your pre-baby jeans.  It is about fitness and making yourself a priority while being a good role model for your family.  I will also say that you don't need to have kids to enjoy it.

Missed Your Workout? Was it an Excuse or a Reason?
by Kara Douglass Thom

There are no good excuses to skip a workout. That’s right. None. However, there are plenty of good reasons that might interfere with exercise. Excuses take on many forms, but 99.8 percent of them are a variation of “I don't have time,” or “I’m too tired.” We’ve all been there.

If you’ve ever missed a workout but knew deep down you could have made it happen, an excuse was in play. It’s like telling yourself a little white lie. Another sign: when explaining your decision, you sound like you’re trying to convince yourself—not just other people—that you did the right thing by skipping. As if repeating the story might make it true.

As for good reasons to miss a workout, those are always clear and definitive; they are often out of your control and don’t require any convincing on your part. You have a fever; your child vomited in the back seat on the way to the gym; your boss asked you to stay late to finish a project. You might have access to a Plan B workout option, but if you don’t, no need to feel guilt. This is especially important for those who tend to err on the side of exercising at all costs; who don't always recognize a good reason to skip a workout when they should.

And just as you would if you missed a workout because of an excuse, a reason not to exercise one day shouldn’t be the end of all future workouts. Tomorrow’s a new day. Will you choose to work out, or not?

Sometimes we need to make trade-offs in life. In the book, Hot (Sweaty) Mamas: Five Secrets to Life as a Fit Mom (Andrews McMeel 2011), we share what we call a “Sweaty Decision Tree” that can guide readers to answer that question, “Should I work out or not?” Variables include whether or not the workout will leave you more or less stressed, what your workout plans were the day before, and if you think a workout is possible the following day.

What may be a good reason one day might be an excuse on another. An excuse for some people might be a good reason for someone else. In order to know the difference on this case-by-case basis you have to be in tune with your body and mind so you can be true to your needs and goals. And if you do miss a workout—whether because of an excuse or a reason—know that it doesn’t have to end your commitment to fitness.

This guest post comes from Kara Douglass Thom, a triathlete, freelance writer and mother of four. She and Laurie Kocanda are the co-authors of Hot (Sweaty) Mamas: Five Secrets to Life as a Fit Mom.

Now for the fun stuff....I have a copy of Hot (Sweaty) Mamas: Five Secrets to Life as a Fit Mom for a lucky reader.  Leave me  a comment about how you prioritize your day to fit in your workout or how you get a workout in even when you have a good excuse (errr reason) to skip it.  I will randomly draw from the comments later this week.  Want it now???  The book is available at major bookstores and on Amazon.com.  Want to keep up with the latest news, they are on Facebook and Twitter.  Tomorrow the tour stop is stopping by Step it Up with Steph.


I would like to thank these Hot (Sweaty) Mamas for making my blog a stop on their virtual book tour and making this give-a-way possible.


Disclaimer:  The book was given to me to review however all opinions are my own.
Posted by Unknown at 7:16 AM 14 comments:

Last night I did something that I promised my parents I would never do.....I rode the pole. Yes, and I do mean a stripper pole.

How did I get into this situation?  I attended my friend's super fabulous birthday party and she had a mystery destination for us.  We met at her house and a big ol' van came haul 14 wild and half in the bag crazy broads us to a place called the Wolves Den Fitness.  As we pulled up, the van of squealing women saw the several stations of port-a-poles through the windows.  I should mention that these windows lacked any sort of privacy....what we were about to do was going to be available for the world to see.

If my thoughts were audible you would have heard holyshitholyshitsholyshitholyshitholyshit....All I could think about was the video of the chick bringing down the stripper pole on You Tube.  Ughhh....that is all I would need. FAT CHICK DOWN!

We met our instructor and it was clear she had a lot of experience in the business if you catch my drift.  It didn't take long for all of us to find our inner strippers and have fun with the poles.  I think some of the women in our party have other jobs.....just sayin'.  One mother of 4 (who is 45 BTW) grabbed the pole and did an inverted slide.  WTF????  She is my HERO!

Me, my moves were more basic.  Climbing up on the platform was challenging enough.  I did manage to swing around the pole but the first time I did it there was an incident.  My legs got tangled at the bottom and twisted.  It took another person to untangle me.  I got a charlie horse and I lost a shoe....it is dangerous.  But after that, I learned a dismount(involving a cat crawl).  I was trying to look sexy whilst practicing my pole dancing and I was told that I A) Looked like I was in pain, B) that I looked fierce, C) that I looked constipated.   *sigh*  I tried.  This is my hot move of the night: 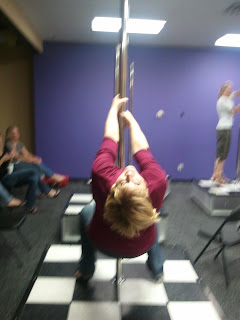 I did name myself Fantasia Glitzthighs (I found my stripper name here)
Maybe someday, I will be able to do the inverted slide like our instructor (whom I call Tits Mcgee).... 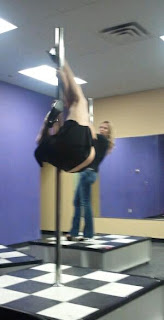 PPR (Post Pole Reflections)
Hope everyone had a wonderful weekend!  Stay tuned tomorrow for a guest post by  Hot Sweaty Mamas.....and a giveaway too!
Posted by Unknown at 12:01 PM 13 comments:

A Week of Couch Fusion

I can't believe Halloween has come and gone.  This year may have been one of the more lame ones I have lived through because I was sick with some flu like bug.  That would at least explain my extreme crabbiness and my sheer hatred for the Monster Dash.  I spent most of the weekend fused to the couch watching really trashy TV.  I did go to work the rest of the week but had very little energy to do anything but watch TV.  Since I do not have anything to post about running or weight loss, I have a recap of how I lost a few brain cells:

Bridezillas
I have never seen so many trashy foul mouthed bitches in my life.  The whole premise of the show is some girl is getting married and it is her day so she gets to be a total bitch to anyone and everyone.  It is Jerry Springer crossed with TLC's A Wedding Story

I Didn't Know I Was Pregnant
Three words..... What the F#*^;!!!!  Really?  REALLY?  I watched the dramatization of some chick who thought she was constipated grunt and groan on the toilet and low and behold...she literally shit a kid out in the toilet.  Sorry, I just do not buy this crap......especially when they delivered full term babies.  But the show is like a train wreck and I could not stop watching.

Top Secret Recipe
Some dude tries cloning famous foods such as KFC and Cinnabon.  He gets clues to see if he can recreate the junk food.  He lost me when he started stalking people for recipes and did some dumpster diving to see if he could get more information from restaurant's garbage.  To me that seems like it is crossing the line into freakdom.  Now if he could recreate a Reese's candy bar, maybe, but he lost me at KFC.  It was kind of creepy.

The Today Show
Anyone else just wanna pop Ann Curry in the mouth for no real reason? (see I told you I was in a mood).

The one the wins the award:
Sharktopus.  It is a movie about a shark/octopus hybrid that was created by the military. Something goes haywire in this thing and it terrorizes people.  It was beyond bad but it was something that I could not stop watching.  If you are wondering whatever happened to Eric Roberts, you can find him here.  This movie gets the Chubby Chick two thumbs up award (see I told you I was on the couch too long). 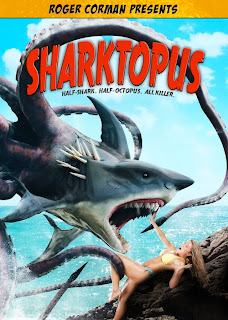 In my week of laziness, I did manage to snap a few photos of my monsters on Halloween..... 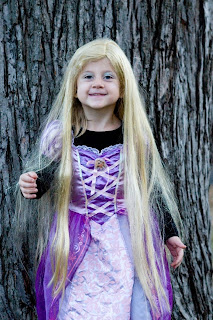 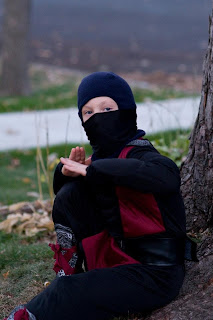 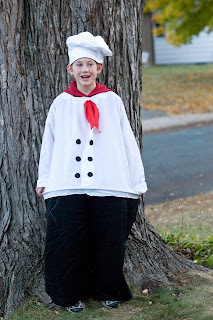 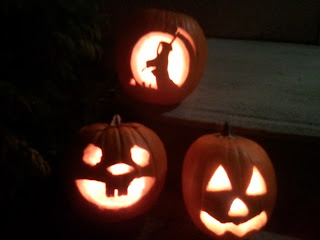 Hope everyone had a great Halloween.   I back to normal (relatively speaking) and back on track.  Have  a great weekend everyone!
Posted by Unknown at 9:06 AM 14 comments: