Get Out of My Head!

I have had to revisit my Big Fat Midlife Crisis marathon goals:


Goal #1:  Run Grandma's Marathon and Twin Cities Marathon before I turn 40 in December

Goal#2:  Have fun and finish Grandma's without a time goal.

I felt the need to restate these goals because I had a couple of weeks of bad running.  It was a bunch of different things that contributed to the craptasticness of my running (doing a Superman style fall on a busy street, getting pelted in the face with pine cone, and having to make a call of shame pick me up call for help) but the icing on cake was freaking out about a time goal.  It all started when I met this woman who mentioned that she was running Grandma's and she talked about how slow she was....a 4:30 finisher.  My heart sank....she calls that slow?  For some reason she got into my head.

I am working on resetting my thinking.  I am not sure why her commenting on her personal time affected me.  It wasn't like she was boasting.  We simply were having a nice conversation and my guess insecurities we poked.  I am just going to keep repeating:

Goal#2: Have fun and finish Grandma's without a time goal.


(Plus, I am confident that she won't have fun marathon toes and awesome friends to run with her)
Sunday was the one of the greatest days ever!  Kelli (my marathon life partner) and I have a blogging friend that was planning on being spectator at Grandma's Marathon.  We voiced our concerns to her that being a spectator was not acceptable and that she NEEDED to run with us.  She ignored us and kept turning us down despite our constant badgering.  We took matters into our own hands and ambushed her.  We signed her for Grandma's.....which is 4 weeks away.  We then let her find out about it on Facebook.  Yeah, we are kind of evil that way.  She took it in stride and was a really good sport about it!
By the way...I really need to brag for a second.  I finished my first semester of school with a 4.0!!!!  My final project was to build a website using html, style sheets, and javascript.  I put more hours into this project than I care to admit but it paid off and I nailed it.  FOUR POINT OH!  Student Carly from 1992 would not know student Carly 2013.  I can't wait to take more classes.

I thought that life would calm down after school ended and after hockey season was done.  Nope.  At the last possible second my children decided they NEEDED to play baseball (ugh).  I didn't argue because they have a never ended supply of energy that needs to be expended.  So yeah....baseball.  Four nights a week are now devoted to the most boring game on the planet.  Being the mother of the year, I often cut their games short to go for a run (well.....I have 2 marathons to train for!!!).

﻿ ﻿
If you are interested in winning some Shaklee, stop by and leave a comment on my review.
Posted by Unknown at 12:45 PM 9 comments:

When giveaway ends, another begins......

I am very flattered that my friend Carrie reads my blog. She is a friend from high school and we reconnected over facebook. It turns out she only lives a few miles from me (and she blogs, too)! She reached out to me after reading about some of my crazy health issues. She mentioned had some "all natural" Shaklee products that were a must try. I hmmmmed and haaaaaed because when I see the words "Independent Distributor" I usually spin on my heels and run the opposite direction because I don't want the high pressure sales. This was not the case with Carrie. She urged me to try them and promised I would love them. So we met up one night, our daughters started wrestling in a Panera and became life long friends, and......
...I did just that, I tried them.


I first tried the Energy Chews. I was kind of excited to try something new because while I like Gu, it is not easy on my stomach. My other energy methods I have used in the past weren't so great....Red Bull and 5 Hour Energy shots. I decided to try these on all of my runs over the course of a week and these are my thoughts:

Carrie also told me that over 100 Olympians have used Shaklee products, and 60+ have been gold medals. Apparently their products are on the Anti-Doping list. She also said she has stories of runners who have had their best times ever after switching to Shaklee products. If that is the case I am going to eat an entire bag before Grandmas!!!
The only down side is that they cannot be purchased in a store and they are not cheap. When you break down the cost, it is only a few cents more than Gu.

I also tried the Joint Health Complex. She gave me a sample of 5 days worth to try. I took it, but rolled my eyes because my joints are "fine". Somehow I forgot that my knees, ankles, and hips can get angry from time to time (more often than not these days). I didn't want to waste the sample so I took it. She emailed me a few days later and asked how I liked it. I wanted to say she was full of it but I couldn't. I told her that it was perhaps my imagination, but I have not had any issues with my joints letting me know that I have abused them. She didn't say it but I know she was thinking it...."I told ya so". (I guess we WERE on High School dance line together, so our knees are probably in similar shape, as we were doing a lot of knee drops back in the day). 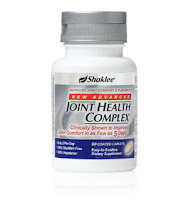 Shaklee has a whole line of products devote to active lifestyles. They also have a "Pure Hydration Drink" called Performance. Apparently it's clinically proven to hydrate better than water and it has more electrolytes and provides more energy than the leading hydration drink. Oh yeah, and it has nothing artificial in it. Hmmm. I might need to try this next!

One lucky winner will win a canister of Performance! Wanna win it? Hit me up in the comments as well as give her facebook page a thumbs up! Additional information and a catalog of products can be found at soup.myshaklee.com~~ you can gain further information from her on the "Contact Me" section of that page. Hit Carrie up-she's great about trying something for the first time at member's price, before joining, and she helps out in the shipping department, too!
I will choose the one lucky winner at random next week.

Thank you Carrie for the samples and for introducing me to a great product that I truly did not want to like but ended up loving!
Posted by Unknown at 1:33 PM 9 comments:

I have got some catching up to do. But first I need to announce a winner.


The winner of "Honey Do You Need a Ride-Confesions of a Fat Runner" is:

Honey Do You Need a Ride, Confessions of a Fat Runner is Jennifer Graham's hysterical, heartbreaking, honest,and inspirational memoir about life and running.

I have a confession, the first thing I did was look at the photo in the back of the book to see how chubby Jennifer really was (Truth:  I pulled a catty woman move and I wanted to see if she was bigger than me).  What I saw was a pretty woman who looked like she had a nice figure. I was a little miffed as a chubby chick that she didn't look like a "fat" runner.  How could this woman write about being "fat"?  As I read more about her life, she does/did struggle with her weight and she does know what it is like to be in a much bigger body.  In fact she disclosed that she has been in a range of sizes up to size 20.  She's been there.

Jennifer is not fat in terms of what society would define as fat.  In fact, I think she looks fabulous and healthy (and a lot smaller than I am).  But to the running community she is an Athena....aka a more "robust runner".   She is not a person that you would immediately pick out as a runner.  I know from experience people treat you differently when you don't look like "real runner".  Her stories made me laugh and nod with agreement.
﻿﻿﻿
To say I LOVED this book was an understatement. I folded the corners of pages where I could directly relate to something she wrote and by the time I finished the book it looked like ALL the pages were folded. I think I have found my chubby runner kindred spirit!!

I felt like I could sit down and have a glass of wine and share crazy running stories with her.
It is hard for me to pick out a favorite part of this book.  I think what I loved the most was that she gave a voice to the runners that are the mid and back-of-the -packers.  I am in this group.  It is a common misconception that slower runners and ones that have a bit more girth, lower the bar for the running community.  I know from my own blood, sweat, and tears this could not be further from the truth.  Jennifer Graham is the same way....she is every bit as determined and bad ass as any front of the pack, "shirtless wonder".  The Cinderella moment that made me cheer out loud was when she came in "70th" in her age group...a true middle of the pack moment.  One that I hope to achieve one day myself.

Now here is your chance.  I am excited to be able to giveaway a copy of Jennifer Graham's book. I will select from the comments randomly next week.

Thank you to Emily Hedges for making me a stop on this virtual book tour.
Posted by Unknown at 5:00 AM 25 comments:

I guess that is all I  have for on my mind right now.  I hope the weather is better wherever you are and I hope you have a wonderful weekend!
Posted by Unknown at 12:03 PM 5 comments: